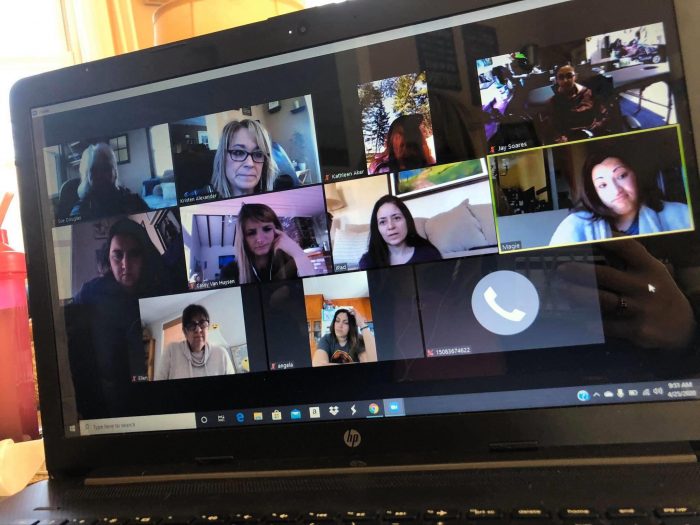 On a recent sunny Saturday morning, Kristen Alexander sat on her deck sipping coffee with four other military spouses.

Under normal circumstances, they would have been together – perhaps in Boston at a food festival or in Plymouth on a hike. Because of the pandemic, each was in their own home, safely communicating with one another via Zoom.

It’s become a Saturday morning ritual that Alexander has organized on behalf of HIT. “When we were doing the in-person events, we were only meeting every other month,” Alexander said.

Now it’s weekly, giving military spouses in our region a safe place “we’re creating,” Alexander said. “We have been a space where people can be vulnerable, where they can cry and where they can laugh hysterically.

“Everybody is supporting each other,” she continued. “It’s been a pretty powerful space. One of the things that has come up is our identity – who we are.”

Sheela Soares said she’s enjoyed the ability to have a set time that allows her to focus on herself. “I can get away from my family, be secluded and be open and honest,” she said. “It is nice to have these opportunities to talk about my personal feelings and to be with other people who understand what it’s like to be married to someone in the military.”


Ellen, who attended our Fall Couples Retreat last October with her husband Dave, said the virtual meetups have given her a meaningful connection to other spouses. “I am so grateful for this,” she said. “I could have been very isolated from this community. This has changed me in a really good way.”

For those who may be more reticent, Norma said, the coffee chats have “given me a chance to talk to people one on one versus going into a larger group which is more nerve-wracking. You get to develop relationships with people in a more intimate setting which makes it easier for people like me.”

She also has others for support on a deeper level as she navigates the difficulties of a husband who is facing life challenges without the benefit of professional help. “His therapist moved to private practice and he’s slipped through the cracks of the VA system,” she said. “He’s gone maybe six months without talking to someone and now we’re spending every waking hour together.”

A common thread among all the spouses is they share an uncertainty about what the future will bring.

“It is very worrisome,” said Sue Douglas, whose husband is a Vietnam veteran.

The Saturday morning gatherings help to calm those fears, which is one reason why Heroes is continuing them even as we have safely returned to in-person gatherings. “I think we want to keep this going,” Alexander said. “It’s been super powerful to be able to take a situation we thought would pull us farther apart and be able to come closer together. I feel a stronger bond through the relationships we’ve been able to create here.”

If you’re a military spouse interested in joining us for our virtual coffee chats or an upcoming event, please reach out to us at spouses@heroesintransition.org. All events are free for those we serve.