Ruck4HIT Volunteer Coordinators Have Special Bond with Heroes In Transition 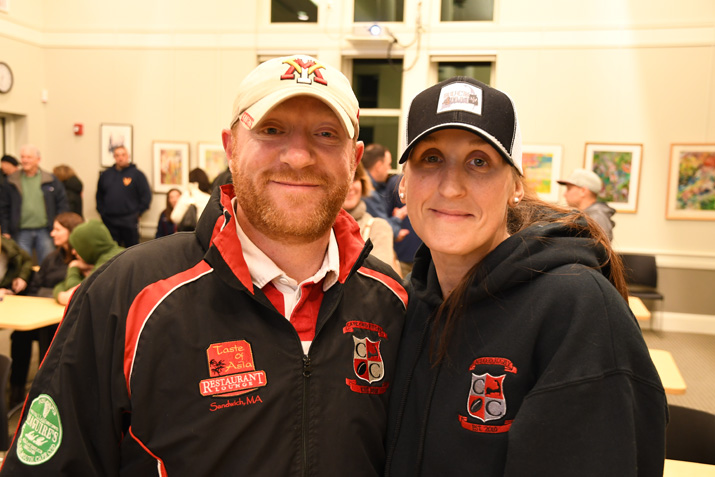 As U.S. Marine Captain Eric A. Jones’ funeral procession made its way from John Wesley United Methodist Church in Falmouth to Massachusetts National Cemetery in Bourne on the first Saturday of November 2009, hundreds of people stood along roadsides to show their respect to Mashpee’s fallen hero.
Though they had never met Captain Jones, Kristen and Tedd Black were among those there that morning.

“I have my connection to Eric having been a Marine,” Tedd explained.

The bond between Marines is unlike no other. “When a Marine passes, they all feel it,” Kristen said. “When Eric was brought home, I remember the sadness Tedd had. I remember standing there with our American flags and Tedd standing at attention as Eric was driven into the National Cemetery.”

Connecting to Heroes In Transition

Six years later, the couple deepened their connection to Heroes In Transition when Kristen helped organize the inaugural 24-Hour Treadmill Relay at Anytime Fitness, where she works as a trainer, to help raise funds for Heroes In Transition.
“Tedd and Cyndy instantly bonded as Marines and their families do,” Kristen said. “Not long after Tedd was diagnosed with pancreatic neuroendocrine cancer.”

That diagnosis occurred on November 10, 2015, the U.S. Marine Corps birthday. 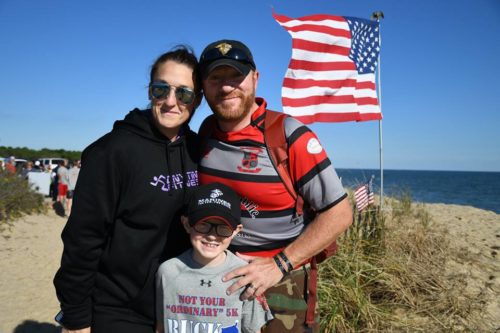 The Blacks, who have three children, suddenly found their lives turned upside down. Numerous trips to Boston led to Tedd undergoing invasive, life-saving surgery which forced him out of work.
That is when Heroes In Transition stepped in to ensure the Blacks could cover their medical bills while staying current with their mortgage.

“We are truly blessed to have the Jones, Nicole and Steve Spencer, and the HIT family in our lives,” Kristen said.

“I owe them the world and would do pretty much anything the four of them asked of me to be honest with you,” Tedd said.

Today, Tedd is healthy, more than three years cancer free. His days are spent juggling his jobs as a substitute teacher at Falmouth Public Schools and a security officer at Cape Cod Healthcare, all while helping to raise his children and coach the Cape Cod Rugby Football Club.

For the second straight year, the pair will be criss-crossing all of Cape Cod the first weekend in May as our Ruck4HIT volunteer coordinators.

For them, it’s one way they can give back to an organization that has done so much for them.
“Volunteering is the least we can do,” Kristen said. “We look forward to hopping in our Jeep and following along the Ruck4HIT route again this year. We will be celebrating our twelfth wedding anniversary on May 4 and I couldn’t imagine celebrating any other way.”

Want to volunteer for this year’s Ruck4HIT? Kristen and Tedd are looking for help! Those interested in volunteering should contact them at ruck4hitvolunteers@gmail.com.