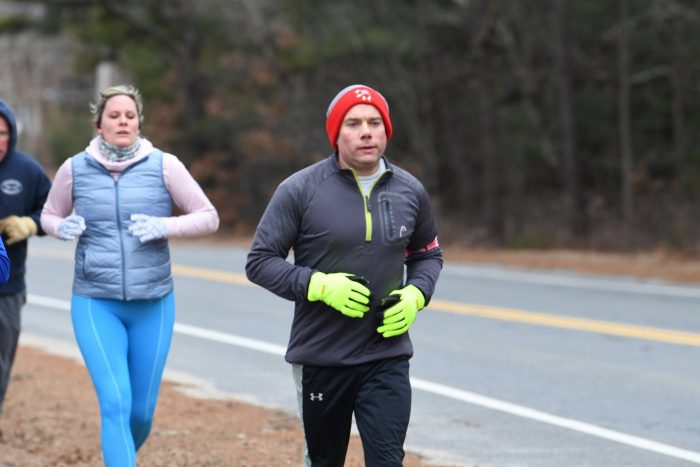 Matt Carroll remembers the moment when he began to fully understand the impact of Heroes In Transition’s work. He had just started coming to last year’s Saturday morning Ruck4HIT training sessions when he was talking to HIT Executive Director Nicole Spencer.

The topic of their conversation was a veteran named Don Boldt and his service dog, Nic. “That’s when Nicole told me, ‘We [Heroes] were the ones to provide Don with that dog,’” Matt recalled. “He is one of my really close friends and I watched his life get saved because of that dog. That’s one of the reasons I’ve supported HIT since then because I’ve seen the positive results of what this organization does.”

This weekend, Matt will lace up his sneakers, put on his rucksack and run in his second straight Ruck4HIT in support of Heroes In Transition.

A Navy veteran, Matt knows what those who serve in our military endure even after they’ve transitioned to civilian life. Last December, a friend of Matt’s lost his battle to PTSD.

This is why Matt is rucking this weekend; he knows how important organizations like Heroes are to those who need the support. “The fact they help with PTSD, suicide prevention, equestrian therapy, service dogs, and provide other family-oriented programs was really huge to me,” he said. “It wasn’t just veterans, but their events are geared toward the entire family.”

The struggles that veterans deal with, Matt said, often extend to their loved ones. “When you talk to guys like Don, they’re not just trying to treat themselves, but their family,” Matt said. That is why programs like the ones Heroes offer serve as an invaluable resource for veterans because they are focused on the entire family.

Since training for his first Ruck4HIT last year, Matt has become a seasoned runner, participating in half marathons and 10ks over the past year. But nothing, he said, compares to the Ruck4HIT which is why he and his teammates on United In Service will ruck, bike, and Stand Up Paddleboard over the course of the next two days.

Matt will do so because he has seen firsthand the positive impact HIT has had in the lives of heroes like Don. “Seeing the people they help and the positive effect they have on people really motivates you to do this,” he said. “This is one of the most challenging things I’ve ever done in my life, but it’s also the most rewarding and humbling at the same time.”