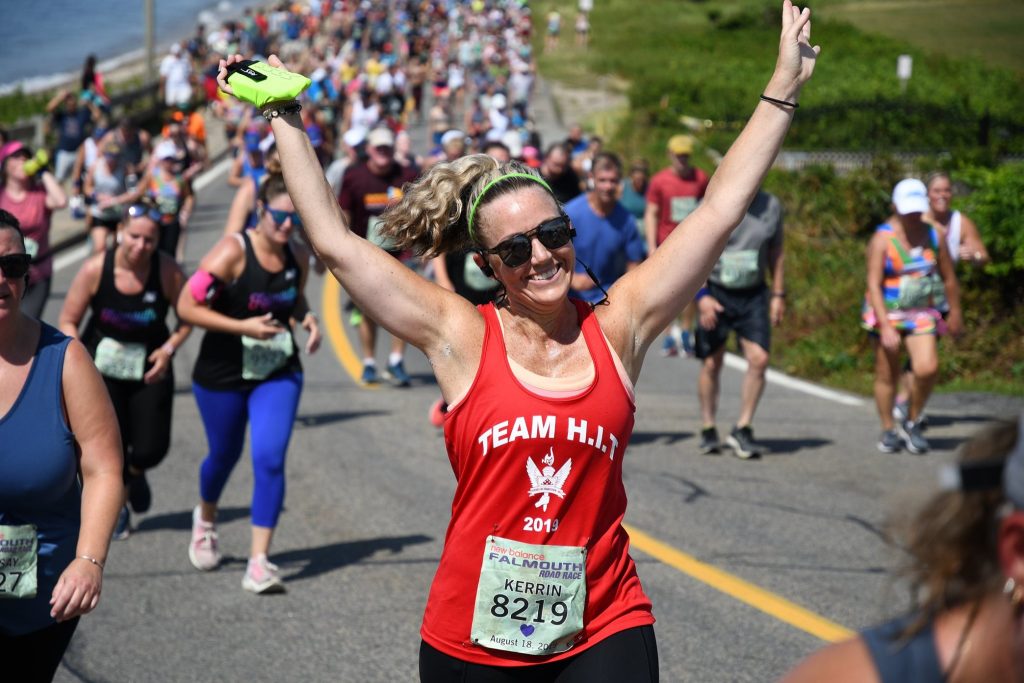 Each time Kerrin Harris has run the seven-mile Falmouth Road Race, her friend Kyle R. Van De Giesen has never been far from her thoughts.

“He always pops into my mind when I’m running the race,” she said.

And so it will be this weekend, when she runs the road race virtually for Team HIT for the fourth straight year.

Kyle was one of four Marines killed just before sunrise on October 26, 2009 when two helicopters collided midair during a combat mission over the Helmand Province in Afghanistan, leaving two survivors. The incident forever altered the lives of the family and friends of all involved in the crash.

That included Mashpee’s Cyndy and Ken Jones whose only son, Captain Eric Jones, was the pilot of one of the helicopters. The couple turned their tragedy into something meaningful, forming Heroes In Transition as a way to honor their son and give back to those who put their lives at risk in service to our country.

The other pilot, Captain Kyle R. Van De Giesen, grew up a short drive from the Cape in North Attleboro.

“He was always positive and liked to have a good time with friends,” Harris said. “He was very family-oriented.”

Kyle was part of a core group of Harris’ close friends she grew up with in her hometown. “There was eight of us in high school who were inseparable,” she said. It was a bond that continued through college and afterwards when each embarked on their own separate paths.

For Kyle, who graduated from St. Anselm College in 2002, his road led the Marines where he fulfilled his childhood dream of becoming a helicopter pilot.

In May 2007, Kyle married Megan Van De Giesen; five months later he learned she was pregnant with their daughter, Avery, prior to his second deployment to Iraq. Before his third deployment – this time to Afghanistan – Megan gave him the news that they would be welcoming another child into their life.

Kyle never got the chance to see Colin Joseph. He was born on November 10, 2009 – the Marine Corps 234th birthday – just four days after Kyle was buried in Massachusetts National Cemetery in Bourne next to Eric Jones. The two Marine pilots were only 29 years old.

“It was devastating,” Harris said. “It was kind of hard to believe. I hadn’t seen him in over a year. The whole situation was unbelievable. Even to this day, it’s hard to wrap your head around.”

The year after Kyle’s death, Harris ran the Marine Corps Marathon in Washington, D.C., in honor of her friend.

Since 2017, she has done the same each August, running the Falmouth Road Race for Heroes In Transition. She admittedly “stumbled upon” Heroes through the race’s Numbers for Nonprofits program which connects runners to a variety of local, regional, and national charities that have bibs available.

“I was looking for a charity that was either veteran- or dog-related,” Harris said. “Heroes was the first charity I found… It was kind of eerie when I found you. It was a meant-to-be kind of feeling.”

As a Coast Guard spouse – her husband Tadd Martin has served for over 17 years – Harris understands the need for organizations like ours. “I love the work you do for veterans,” she said. “I know a lot of people coming out need that extra help. And the work you do for spouses and for families of people deployed – I like to see them get that kind of help because it can get lonely for family members [during a deployment].”

While the race has allowed Harris to support our work, the greatest reward is that it has drawn her closer to Kyle. With each step she takes, she keeps his memory alive, reminding herself of the impact her friend continues to have on her life.