Until last year, the Ruck4HIT was meant solely for ruckers and runners. That changed when the pandemic hit.

In September, we opened the virtual event up to any activity people wanted to do that challenged themselves physically while raising awareness to the sacrifices that service members and veterans have made for our freedoms.

That decision allowed kayakers, swimmers, Stand Up Paddleboarders, bicyclists, walkers, hikers and even golfers to participate in last fall’s Ruck4HIT. This weekend, we added our latest athlete to the list – pickleballers.

The credit for bringing the sport – a smaller version of tennis or a larger version of ping-pong – to the Ruck4HIT goes to Mashpee’s John Cotton. “Hopefully, we’re bringing a lot of attention to Heroes In Transition by doing this,” said Cotton, a Navy Seabees veteran.

Of course, it wouldn’t be a Ruck4HIT without a twist. All of the participants – there are 15 who registered to play – are wearing rucksacks to symbolize the burdens our military and veterans carry in service to our country. “We’re playing out of respect to our veterans,” John said. “The Ruck4HIT, especially where I served and my son Christian is now serving in the Marine Reserves, you think whether people are serving here or abroad, you don’t know the pressures and the challenges they are put in every day.”


Cotton, who ran in the event in 2017 and 2018, knows just how difficult it can be mentally and physically.

In his first Ruck4HIT four years ago, he recalled running in the pouring rain at night on Route 28 in Truro. Every car that drove by drenched him with water. And the wind was so strong the poncho he was wearing “blew up like a sail. It was blowing so hard it almost blew me off the road,” he recalled.

That’s when he saw a police cruiser manned by now-retired Police Chief Kyle Takakjian. “He helped tie down my poncho so it wasn’t blowing like a sail. That’s when I asked, ‘You’re not going to give me a ride?’ He said, ‘No. No. I know what you’re here for. You’re here for the ruck. Get on with it,’” John said. “I remember that moment because that stretch was where I looked at it like I can’t go any further. No one was in the road. It was dark. It was raining down hard and I was just done. …When Kyle helped me out, I was reinvigorated and I took off again. That was the turning point.

“In a very small way I feel like in that moment, even though it can’t come close to a situation that our military heroes face, that was the point you got to push through,” John said. “It kind of gives you the extra thought to think if you were in the military, you can’t quit. You don’t have that option.”

It is that mentality that is driving John and his fellow pickleballers this weekend. They started playing at 8 am yesterday and today, continuing until it gets dark. They have paused briefly between games and for lunch. 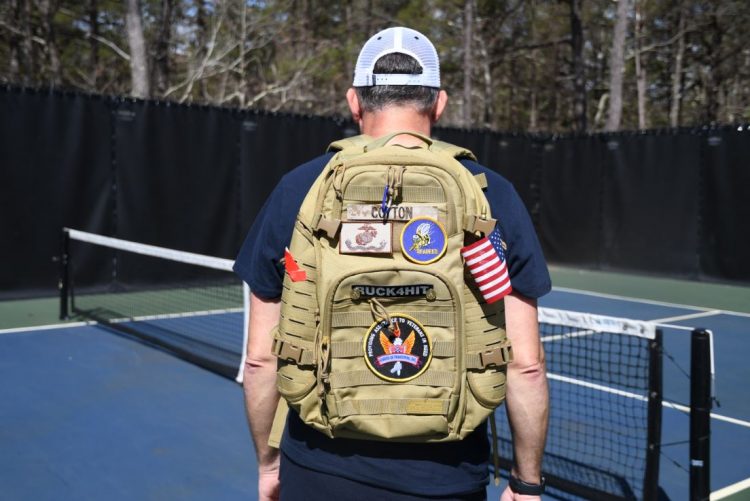 “It is a serious workout, especially the way we play,” John said. His team estimates that every three hours of play is equivalent to running roughly 5 miles.

Along with recognizing the sacrifices made by our military, John and his fellow pickleballers are raising critical funds to support our work. “Everyone coming back from service, there is not one thing they need,” John said of why our programs are so important. “They all need something different. That is where Heroes In Transition comes into play. They do so many different things to help those returning veterans adjust to regular life because there are challenges they are facing that we just don’t understand.”

That’s why John was so excited to bring a sport that he loves to this year’s Ruck4HIT. “It’s something I love to play and at the same time, we’re raising money for a great cause,” John said. “This is such an easy event to challenge yourself because you’re doing it for such a great cause. There’s no greater cause than to show respect to a veteran and there’s no greater reason to push yourself to your limits.”