The drive was started eight years ago by Roberta Cannon, a friend of Eric’s parents who supervised blood drives for the Red Cross in southeastern Massachusetts at the time. She and another friend, Carol Sherman, still organize the event, which is now co-sponsored by The Knights of Columbus and Heroes In Transition, under the auspices of Cape Cod Healthcare.

“Donating blood is truly a gift from the heart, and we are so grateful not only to Roberta and now Carol for honoring Eric, but to everyone in the community who has played a part in the drives since they began,” said Cyndy Jones, who co-founded Heroes In Transition with her husband, Ken. “From the first year, our neighbors and friends have supported the drive, baking and serving food and helping in every way they can. We couldn’t do this without them, and we can’t do it without donors. We’ve had a lot of great years but we’re hoping that 2017 will be the most successful ever.”

The blood drive runs from noon- 6 p.m. at Christ the King Church, 3 Job’s Fishing Road in Mashpee, with pizza, baked goods and other food items from Dino’s Sports Bar, Zoe’s Pizza and 99 Restaurant and Pub. All donors will also receive a complimentary movie pass. Every pint of blood donated will stay on Cape Cod. More information is available at www.capecodhealth.org/give-blood.com or by calling 508-86BLOOD (508-862-5663). 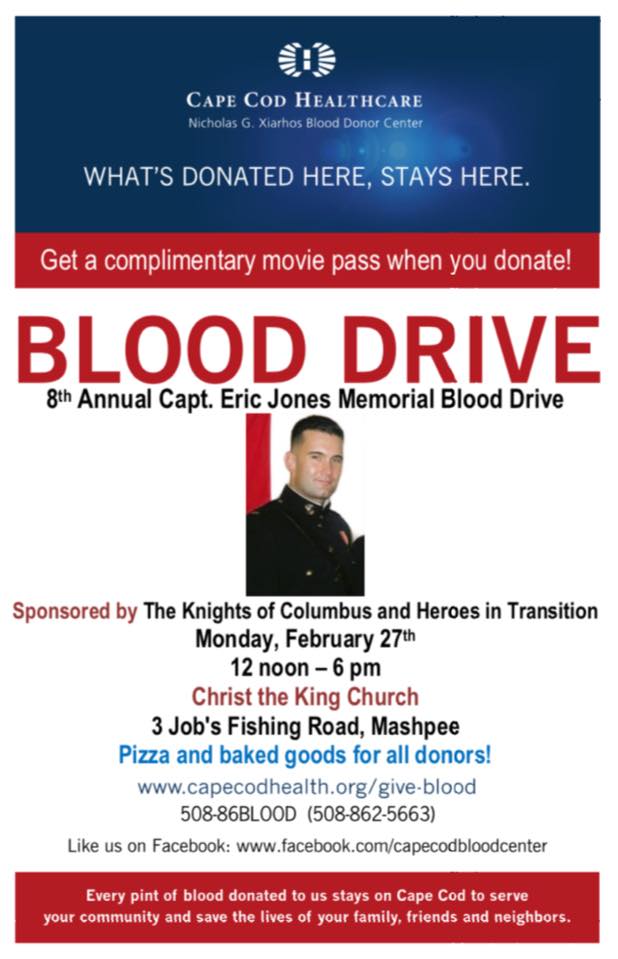