Over 200 Ruck4HIT Participants Earn It for Heroes In Transition


“Have fun,” Heroes In Transition Executive Director Nicole Spencer instructed the nearly 70 Ruck4HIT participants watching intently during the opening ceremony to this year’s Not Your Ordinary Ruck4HIT Challenge Weekend. “And remember why you’re here.”

A few minutes later, Sarah Daley and four of her teammates on the first all-female Ruck4HIT team, Old Mother Rucking Gals – Amy Rullo, Christine Mone, Justyna Marczak, and Consuelo Carroll – made their way to Mashpee Veterans Garden to do just that. There, they stopped at the memorial stone for Marine Captain Eric A. Jones who died in a helicopter crash in Afghanistan in October 2009. That incident led Eric’s parents, Cyndy and the late Kenneth Jones, to start Heroes In Transition as a way to pay tribute to their only son and to ensure returning service members, veterans, and military families received the support they not only need, but deserve.

“It was important to start the ruck by honoring Eric,” explained Rullo of why her team kicked off the event this way.

A little less than an hour earlier Rullo’s daughter, Jessie, a senior at Mashpee High School, sang the national anthem just as she had done in 2019 to start the race in which people test themselves physically by wearing weighted rucksacks to symbolize the burdens our military and veterans carry in service to our country. “It is awesome for me as a parent,” Rullo said of her daughter’s involvement in Heroes. “It means a lot to me, especially when you have a young person who understands what this organization is all about and who wants to help support that.”

This year’s Ruck4HIT saw a record 200 individuals and 19 teams come together over the course of three days to raise nearly $65,000 to support Heroes In Transition’s work and to raise awareness to the sacrifices our service members, veterans, and military make. While many rucked, ran, and walked from Mashpee’s Heritage Park during the weekend, there were people who participated virtually in 15 different states, including Rhode Island, California, Minnesota, New Jersey, and New Hampshire.

Every branch of the military was represented during this year’s Ruck4HIT which saw people participate in 13 different activities — kayaking, bicycling, hiking, swimming, walking, running, rollerblading, and more. Together, they logged a collective 4,121.42 miles in 51 hours.

Chris Mitchell, who has competed in the Ruck4HIT since it started in 2016, bicycled 160 miles, from Bourne to Provincetown, through each town on the Cape. “Each year, I ruck in memory of my father who served 20 years in the Air Force and for all those who made the ultimate sacrifice,” Mitchell wrote on his fundraising page.


Along with an all-female team, this year’s Ruck4HIT saw another first – a team of pickle ballers who played while wearing rucksacks. Greg McKelvey of Mashpee did so to honor his family members, including his dad and nephew, who have served in the military. “The sacrifices our military makes mean everything,” he said. “We should try to support them any way we can.”

Playing on the course next to McKelvey on the first day of the Ruck4HIT was Carolyn Congro who wore a red T-shirt that had the Marine Corps logo on it. Underneath were the words, “The Few. The Proud. Mom.” On her rucksack was a photo of her son, Corporal Joseph Congro, a veteran whose service included a deployment to Kuwait and Syria.

“I’m so proud of him,” Carolyn said, stressing the need for organizations like ours which help service members successfully make the transition to civilian life. “For a lot of them, it isn’t so easy, especially with all the sacrifices they make.”

Army Reservist Ray Regan, who helped start the Ruck4HIT six years ago with our Executive Director Nicole Spencer has run the race three years. Twice, he was unable to participate because he was deployed. He was excited to be back running it this month with his dog Belle, a 10-month-old Belgian Malinois, on Team United In Service.

“This is one of the few events where I get to see the tangible difference being made for our veterans,” he said. “That’s the thing I really love about Heroes In Transition. They are really out there in the veteran community doing the work.”


It’s that work that Spencer saw firsthand when Heroes provided her brother, Adam Babiarz, a combat veteran who served in the Marines, with a service dog, Tracy, in December 2012. “Heroes In Transition saved my brother’s life,” Spencer said after rucking 80 miles in three days along with teammate Megan Carroll. “And this event in some small way just reminds me that there are people who really want to help, not just the active duty, but the veterans coming back as well as their families.”

Justin King of Boston, captain of Major Cluster Ruck, completed his fourth Ruck4HIT this month. His team set and accomplished their goal of individually completing a 5K every three hours for the duration of the event.

“It’s a small give back for all the commitments that soldiers, Marines and sailors across the world do for us. The little bit we can give back, the better,” said King, who currently serves in the Army. “It is so good to see firsthand where all this money goes, to see the lives that it changes. …I think that’s one of the biggest things I love about Heroes is we actively get to see all the good we’re doing for people that put their lives in danger for us.” 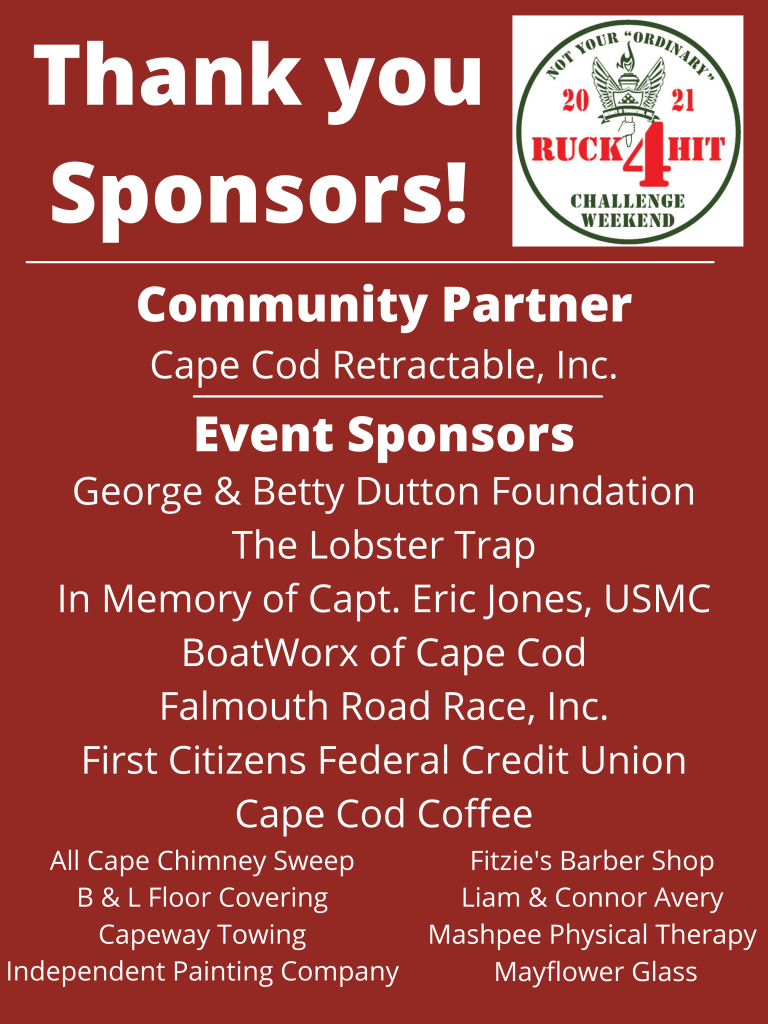